I too often get asked why in the world I left the Caribbean to come to New York almost a decade ago.

Saint Martin is, indeed, viewed as one of the most picture perfect destinations on the planet. Sandy beaches, tropical breeze, easygoing island vibe… Really, what else could you ask for?

Unfortunately, what those people don’t realize is that when hurricane season strikes, it is often unforgiving. Sint Maarten/Saint Martin’s economy is almost solely based on tourism, and a hurricane means destruction, weeks and weeks of renovations.

You would think that Caribbean islands would be well prepared for these super storms, but many of the homes tourists see as charming little shacks are simply made of colorful wood panels and sheet metal roofs. They stand no chance against harsh winds. Our roads flood easily and our wildlife takes months, sometimes even years, to replenish itself. 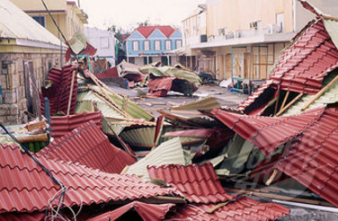 I still remember the gut wrenching feeling I felt, on my first day back to school after Hurricane Luis, in 1995. Before its devastation, the drive across the island was a beautiful ones, speckled in yellow butterflies.

It took almost a decade for them to come back.

Although I was only five when Hurricane Luis paid my island a visit, the memories are vivid in my mind. I can still picture my father cracking open the front door during the eye of the storm. First, seeing the sky, blinding and white, like a water-soaked sheet hanging low above our heads. Then, down at the upturned earth at my feet. Ripped roots and snapped trees all around us, the air dangerously still. I stared up into the light until it was time to go back in.

It hurt too much to look down. 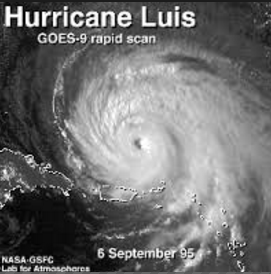 I have been writing about hurricanes my whole life. Trying to make sense of them, mourn the losses, and learn to forgive them, see them as an inevitable part of nature’s cycle. I have written through anger and tears until I dropped the pen and accepted that what had happened was behind us, that it was time to rebuild. Even if, at times, it felt impossible. My Uncle’s disappearance at sea, almost two decades ago, was one of those times.

We are still rebuilding.

I come from a place

mosquito eggs in the water well

hurricanes and canned peas for days

Sleeping on half deflated pool mattresses

praying the roof stays on

the wind beating the boarded windows

and the dogs in the other room

unscrewing the planks on

the windows and doors

water to our ankles

the smell of upturned soil

birds and frogs in the pool filter

Where I come from

dragged down the street

at the helm of his black sailboat

because the harbor was

These past few years, we were all blessed and thankful that no hurricane headed right for our island’s shores. Today, however, we aren’t so lucky. Irma will hit us hard, and I sit here tonight, in my New York bedroom, feeling uneasy and helpless. There is nothing to do but pray that the storm will pass quickly, sparing my family and friends. Who knows how long telephone lines will be down, how much of the destruction will be fixable in the next few weeks.

As I get carried away in my thoughts and words, I send a virtual hug to all of those who will be affected by Hurricane Irma this week. All of those who have experience or heard of Luis’s destruction, and are too familiar with what is to come. Stay strong. Hold those that you love tightly. Keep them close. Be kind to your neighbors and friends. Material things are nothing in comparison to health and safety.

I will be sleeping lightly tonight, thinking of the island I will always call home.

One thought on “Writing About Hurricanes”