Most new moms are under the impression that they must be 10 inches away from their babies at all times. Yes, at all times… even if that means carrying bouncers (even pack and plays) into the bathroom while they shower.

For the first few months, every time Liam emitted a sound (and I mean any little peep), I’d stop, drop, and run to his bouncer, crib, pack and play, whatever. Yes, you could say I was whipped. But over the last few months of sleep training and other major milestones, I’ve realized how versatile my son can be (as all babies are!) I’ve realized that when he tries to get my attention from his play room, it’s usually to help him with something he’s capable of doing on his own –  and most of the time now, I let him… Because he can do it!

What has letting Liam be more independent taught me? To differentiate whining from hunger/sleepy cries. I know that when he is persistant, he is ready to end play time. Additionally, by letting him spend some “alone” time, I’ve helped him become an amazing self-soother. He can spend a good hour on his own with his toys! Not only does this “alone” time allow him to explore without fear and experiment his safe, fenced-in play zone, it also teaches him how to manipulate objects, learn cause and effect, tolerate frustration (practice makes perfect!) and be patient.

Myth #1 It’s not good for babies to play alone, without mom and dad there to guide them.

The problem with this statement is that when Moms and Dads play with their babies, they often tend to take over and “teach”. The most valuable child-directed play occurs when parents spend time observing and responding, without always actively participating. If we hover and try to micromanage play time, our babies will naturally follow our lead rather than create and initiate plans of their own.

If you let them have it (in a safe environment), your babies will enjoy the independent time, which can mean daydreaming, playing, touching, crawling, etc… not necessarily always actively “doing” something. If they need you, they will get your attention. Trust them! You’ll realize that by letting your babies have their own fun, you’ll have time to do some chores/tasks of your own instead of monitoring them 24/7. And then – like magic – you’ll realize you actually enjoy play time with your baby a lot more!

You’d be surprised how much your baby is capable of. Parents are often the ones who set boundaries for their children because they answer for them (he can’t do this, he hates that, etc…) Sometimes, all it takes is a little getting used to. If your baby is used to being micromanaged, positioned, or carried, he may have more trouble adapting to this change. Give it some time, and remember that independent play does not mean you must be out of the room – you can be as close to your baby as you want, just let him/her lead play time!

Fenced-in play rooms are amazing because instead of having to say “no” because of possible dangers (outlets, furniture, pets, etc…), your baby has the ability to roam around freely, on his own. Additionally, babies who follow their parents around in the common room (even in the most baby-proofed home)! don’t focus on play as well or feel as truly free as babies in secure spaces.

The key is to switch it up! We often remove some of the toys and replace them with new (or forgotten) ones. The more he has to keep himself busy, the more willing he will be to play independently! Remember, you can play with your baby too, just make sure you let him call the shots 🙂

Third: Give your baby some space (but reassure him if he needs you!)

A good idea at first is to stay in the same room, but start an activity of your own like folding laundry, reading, or say, work on a blog post 😉 You can occasionally comment on what he is doing or encourage him to keep playing. That way you are not directly involved, but are providing him  with comfort while he is playing on his own. If your baby has enough of independent play after 10-20 minutes, you can slowly tack on a few minutes each day. Before you know it, he’ll be playing like a pro! 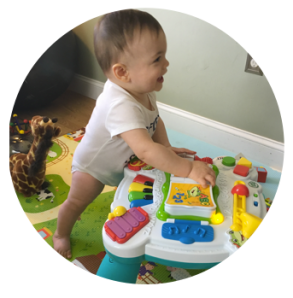 3 thoughts on “Why You Should Encourage Independent Play”