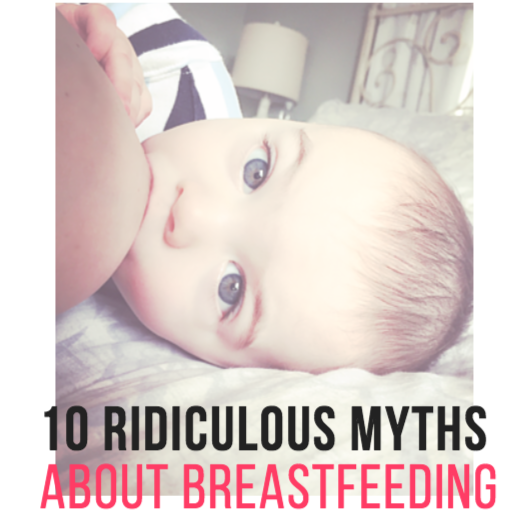 I know I often write about breastfeeding… but I can’t help it! I just feel like it’s one of those things that everyone has an opinion about, but many women (and men!) are misinformed about just how easy it actually is. Below are some of the most inaccurate (and yes, ridiculous!) things I’ve heard about breastfeeding over the past 9 and a half months:

The other day I overheard a woman say to a friend, “once my son has teeth, that’s it, I’m done. I’m too scared he’ll rip one of my nipples off.” Although her fears are justified (no one wants to end up nipple-less!), they couldn’t be further from the truth… a baby suckles with his/her tongue wrapped around the nipple, and teeth should be nowhere in sight. It is impossible for a baby to eat and bite at the same time! My son has six teeth and yes, he has bitten me before (often by mistake!) All I did was remove the breast from his mouth for a few seconds; he quickly learned by association that biting means no milk.

(I think it’s safe to say that a lot of women aren’t just afraid of biting, but mostly of being judged by the people around them. Breastfeeding an infant/toddler who has teeth and is capable of pulling a blouse down in public or asking for milk with words rather than tears is disconcerting to some mothers… mainly because our society makes them feel that way. I’ve already shared my opinion on this topic here.)

Between 1-5% of mothers who give birth are unable to produce enough milk (usually due to severe problems.) Although they may not be able to exclusively breastfeed, they are still able to produce milk – and no amount is too little!

Women are made to breastfeed – if they can’t, it’s usually because of rare medical conditions such as insufficient glandular tissue, breast cancer, hypoplastic breast syndrome, breast reduction or other extensive breast surgery, galactosemia, pitituary or thyroid imbalances.

Again, our wise lactation consultant said it best: It’s quality over quantity when it comes to breastfeeding! All women are equally capable of producing an abundance of milk.

This one gets me every time. How in the world can you say that bottle feeding is easier than breastfeeding? Let me paint a picture for you: it’s 3am, your newborn baby cries. You have two options: a.) scoop him out of his bassinet and into the bed, placing him at your breast, or b.) go to the kitchen to make a bottle, come back into the room, pick up your baby, feed him sitting up, wash the bottle parts (or leave overnight, waking up to crusty bottle parts to clean and sterilize the next morning).

The only thing that I do agree may be easier with bottle feeding is that you can have your partner (or family members) take over with feeds. While breastfeeding, you must be near your baby every 2-3 hours to feed him. This may seem difficult to a new mom who is having a hard time recuperating from childbirth, but I assure you, it is only temporary. Have your partner soothe your newborn throughout the night and wake you up when it is time to feed him – this should ensure that you get a few hours of sleep, at least.

Believe it or not, what you eat has very little to do with your baby’s well being. You do not need to maintain a perfect diet in order to provide quality milk for your baby. In fact, a mother’s diet has little influence on her milk. As KellyMom.com puts it, “Nature is very forgiving – mother’s milk is designed to provide for and protect baby even in times of hardship and famine. A poor diet is more likely to affect the mother than her breastfed baby.”

As alcohol leaves your bloodstream, it leaves your breastmilk. Since alcohol is not “trapped” in breastmilk (it returns to the bloodstream as mother’s blood alcohol level declines), pumping and dumping will not remove it. Pumping and dumping is only done to relieve the fullness of your breasts and avoid engorgement — it is solely for the mother’s comfort.

Women (me included) are told that if they are engorged, they should get in a hot shower or apply a warm washcloth. Yet just like you would never apply heat to a swollen ankle, the same goes for engorgement of the breasts.

“To put heat on a breast creates more blood flow to the area and actually increases the milk,” said Sara Chana Silverstein, an international board-certified lactation consultant, master herbalist and creator of the Savvy Breastfeeding app. “Ice reduces inflamed tissue around the ducts so breasts can drain properly” (foxnews.com).

Worst mistake ever! The infection/illness will already have been incubated in your body for a period of time before symptoms start to become noticeable — your baby will already have been exposed to the source of the infection. Breast milk contains antibodies which help fight off harmful bacteria; if you stop feeding while you are sick, your milk supply will decrease as the body works on a supply and demand basis.

There is no guarantee that you won’t get your baby sick (avoid close contact to be safe), but nursing is the best thing you can do to protect him from your infection or illness.

This is not true, although many women would like it to be so they have something to blame! Sagginess is caused by aging and gravity and is often dependent on genetics.

According to a 2008 study in the Aesthetic Surgery Journal, breastfeeding is not a risk factor for breast ptosis (another word for sagging). Actually, the pregnancy itself is probably the bigger culprit, says Mary Jane Minkin, MD, a clinical professor of obstetrics and gynecology at Yale University School of Medicine. (prevention.com)

I’m all about women making the decisions that are right for them, but it is important to be informed about breastfeeding and not believe things that are inaccurate. Breastfeeding does not prevent you from living your life to the fullest! I have friends who work full time and still manage to exclusively breastfeed their babies. It is a commitment for sure, but 100% possible! And remember… no amount of time is too little! Stick it out for as long as you can, that is all that matters.

6 thoughts on “10 (Ridiculous) Myths About Breastfeeding”